Plane Tabling? What on earth is that? That was my response to my husband’s query whether we should sign ourselves up for some of the latest NOSAS (North of Scotland Archaeology Society) activities.

Needless to say I googled it! I still wasn’t sure if it was really my thing as I’m not exactly very precise when it comes to measuring and accurate scale drawings which is what it sounded like it entailed. However, what could be the harm in giving it a go and it meant a day out in the fresh air in a part of the country I didn’t know much about. So we signed ourselves up to ‘plane table’ Ormond Castle by Avoch on The Black Isle.

Not a lot remains of this little understood Medieval enclosure castle which is situated on top of the hill. It is traditionally associated with William the Lionheart who built 2 castles on The Black Isle in 1179. This is believed to be the remains of one of them. After being in the hands of the de Moray family it passed to Royal control in 1455 and in 1481 James III granted it to his son, the Marquis of Ormond where it gets its present name from. It was destroyed during Cromwell’s invasion in 1650, with the stones being removed to build his Citadel in Inverness.

The local Avoch archaeology group wanted to record the remaining features of the castle and look into the possibility of a dig sometime in the future. Nowadays, a lot of the recording processes are done with modern instruments like GPS and laser measuring devices but traditionally the process known as ‘plane tabling’ has been used.

After a wee introduction we were assigned to groups and given a section of the site to record. Breathing a sigh of relief, I was told my leader knew all about the process. We only had to record the outlines of features e.g walls that we could ‘see’. However, as everything was overgrown with grass including old tree stumps this wasn’t straightforward and led to a few discussions about where the edges actually were! Measurements were taken and it was all plotted on the paper, before joining up the dots and drawing shapes which hopefully matched what we could see on the ground.

Although the day was a little dull, it stayed dry with only a gentle breeze so our coffee and lunch breaks sitting on top of the hill were very enjoyable. The views down to the small village of Avoch, the snowy hills to the west and across the firth to the Inverness airport area were beautiful. Truly, a great site for a castle.

Our task was purely to record the castle and absolutely not to dig or excavate in any way. However, animals had been digging around so one of the leaders had a wee look at the burrows in case anything had come to the surface. She was rewarded with a piece of medieval pottery which she has now passed on to the concerned authorities. 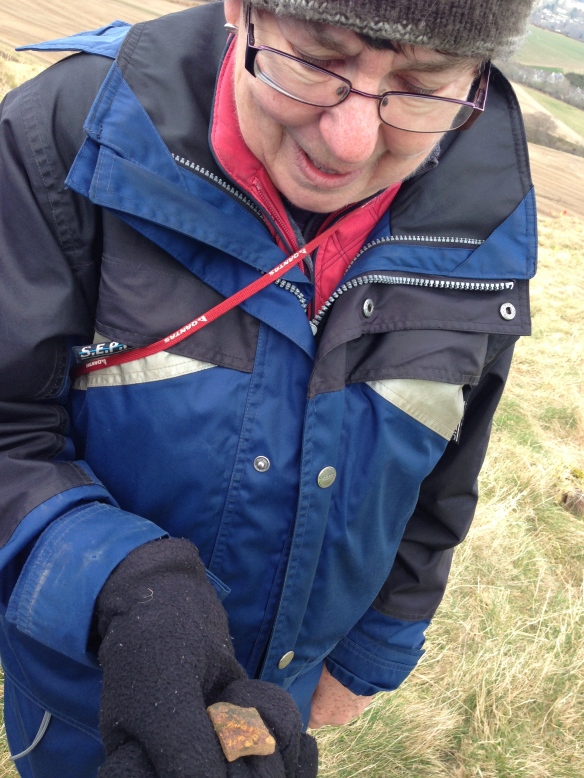 It doesn’t look very exciting but in real life you could see the typically green glaze that was common at this time. It also reminded me of the pieces that were excavated at Cromarty – not so very far away- last summer.

Well, despite my reservations I really enjoyed the new experience and think my measuring and recording was reasonably accurate! There are 3 more plane tabling days planned to record other sites and I definitely want to go to at least one of them to practise what I’ve learnt and hopefully improve on it- I just hope I’m assigned to as knowledgable and patient a leader as I was this time.